A bold new look for the Gaumont Building

A planning application proposing a significant facelift to the Gaumont building, located on the junction between Barker’s Pool and Burgess Street in the city centre, has been submitted today.

The improvement works fall within the wider Heart of the City development scheme – led by the Council and their Strategic Development Partner, Queensberry. Plans would see the building’s current red steel frame completely removed and replaced with a contemporary design.

A planning application for an adjoining Radisson Blu hotel, which will have entrance lobbies located on Pinstone Street and Burgess Street, has also been submitted in recent weeks.

The Gaumont Building is situated in between John Lewis, the Peace Gardens and Fargate and the site has a rich history in the city centre. Having originally opened in 1927 as the stylish Regent Theatre, the building went on to become the Gaumont Theatre in 1946 – hosting many high-profile concerts such as The Beatles. By 1969, the original theatre décor was stripped out and, following demolition in 1985, it was transformed into a cinema, before it later became a nightclub.

The new façade proposals for the building, designed by Sheffield-based HLM Architects, who are also working on the Radisson Blu hotel, take inspiration from the building’s origins as the Regent Theatre.

“The final concept for the façade is a playful reinterpretation of features of the Regent Cinema. The new façade provides an elegant and refined addition to Barker’s Pool which respects the civic location of the site. To the corner of Barker’s Pool and Burgess Street a double height entrance has been formed, creating a generous public entrance to the building." 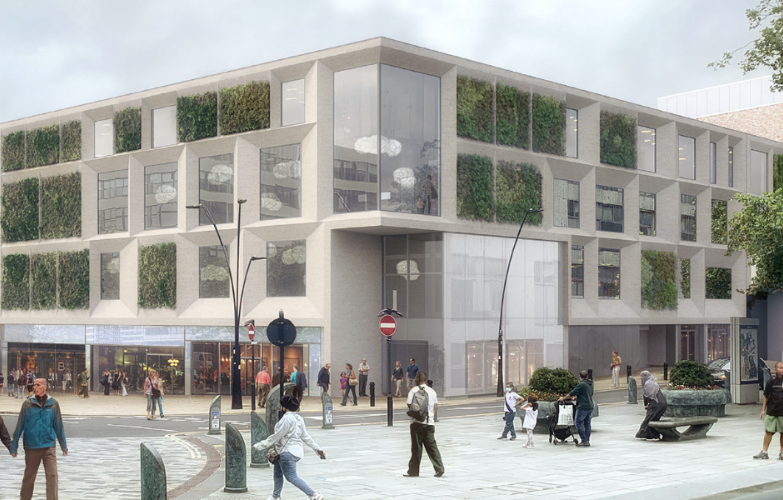 Plans also include the potential for some external green ‘living walls’, providing environmental and sustainability benefits that reflect the clean air ambitions of the Council.

Although the final use of the building is not yet confirmed, it is anticipated that retail will remain at the ground floor along Barker’s Pool. The planning application ensures that the alterations to the building’s internal fabric are kept to a minimum, which allows maximum flexibility moving forward.

"The Gaumont is in an important position within the city centre. With a new Radisson Blu planned next door and with the great work taking place on Pinstone Street, I don’t think many people in the city would disagree that the existing look of the Gaumont is outdated and tired, and in need of a refresh.”